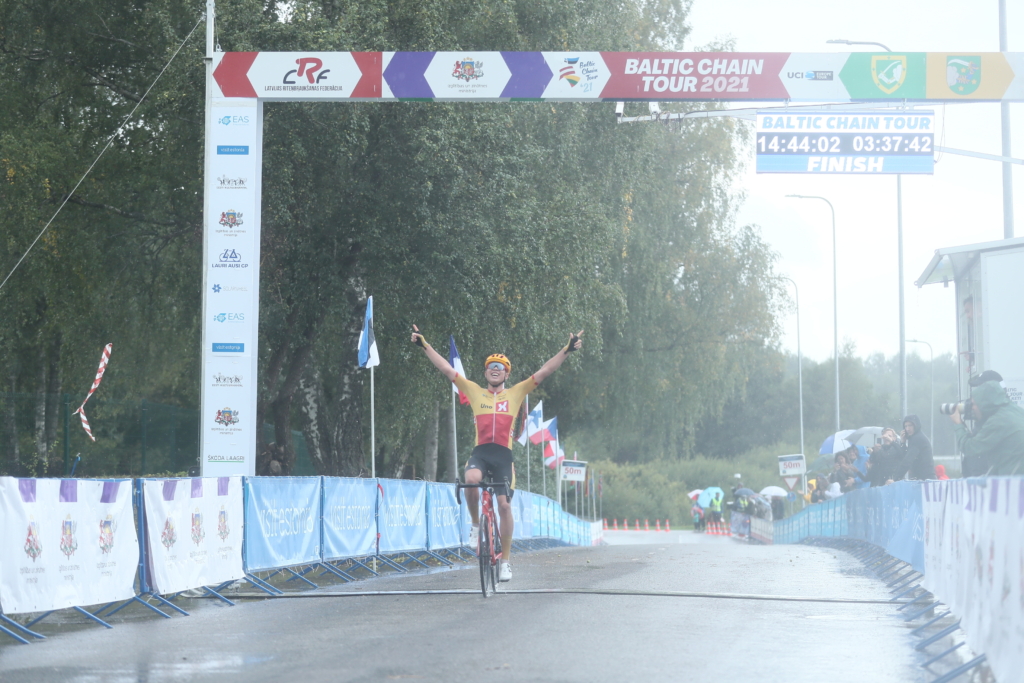 On the last day of the multi-day race a second fight was expected since top 27 riders could fit in 13 seconds. Each bonus second that was distributed in both the intermediate and final finishes was accounted for and could become decisive.
In the first intermediate finish, on the 29th kilometer of the stage in Strencis, the Estonian National Team leader Karl Patrick Lauk was able to become the virtual leader. Winning the intermediate finish gave him 3 bonus seconds and overtaking Laurence Pithie, who started the race with 1 second lead.

Before the second intermediate finish, at the 91st kilometer, a 3-member group got away from peloton, including the Polish rider Norbert Banaszek (Mazowsze Serce Polski), the Czech rider Petr Fiala (Topforex Investments ProCycling) and the Norwegian rider Oskar Myrestøl Johansson (Uno-X Dare Continental). The trio stayed together for about 30 kilometers, taking bonuses from two intermediate finishes, in Mazsalaca and Rujiena.
Then the trio fell apart because Banaszek and Fiala thought that almost a minute’s progress in front of the main group was not enough to finish with the victory. It is wiser to return to the main group. However, the 19-year-old Norwegian rider thought otherwise and went from 50 kilometers from the finish to the full bank, taking on a brave solo ride – all or nothing.
The gap with the main group grew to almost three minutes and when peloton started to “wake up” and work it was already too late. Johansson endured to the end and overtook the nearest competitors in the finish by 46 seconds.

The finish of the main group was decided by Pithie, who rushed to the last corner after Norman Vahtra, but was able to pass the Estonian national team in the final meters.
The 19-year-old New Zealander, who showed amazing stability, was second in all three stages, enough to win overall classification.
His success was 5 seconds ahead of Karl Patrick Lauk and 14 seconds ahead of Antti-Jussi Juntunen (Ampler Development Team).