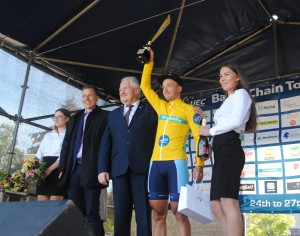 After the stage Bogdanovics received the yellow jersey for his lead in the general classification, as well as the dotted jersey for being the most competitive rider and the green jersey for being the most active rider. He placed second in the second intermediate sprint and won the third intermediate sprint. The white jersey of the best young rider went to Silver Mäoma of the Estonian National Team.

The race started in rainy weather with only ten degrees celsius and there was quite a lot of wind. Later on the rain stopped and the temperature rose, but the rough morning weather suited the team tactics of Rietumu Banka – Riga.

– We knew that the race was going to be very windy, and decided to tear the group apart. This happened after 33 kilometers of riding, and I was in the front the whole day, Bogdanovics reports.

Before the first intermediate sprint the peloton split into small groups, which evetually after 87 kilometers of racing formed into a front group of 21 riders followed by a peloton that crossed the finish line 6 minutes and 38 seconds behind the winner.

– My team did a great job controlling the race. I had great legs for the sprint, and two of my team mates gave me a lead out. Tomorrow it will probably be a similar wind, but the finish will be harder because it is on a hill. If I have good legs I think I can still win.

Tomorrow the race continues with a 170 kilometer stage from Jelgava to Sigulda.