Martin Laas, a rider of the Estonian national team, won 2nd stage of the Baltic Chain Tour, Jelgava – Sigulda (147 km). Yesterday’s winner Rait Ärm continues as the leader of thetour, who today contributed to the opening of Martin Laas sprint in bunch sprint. 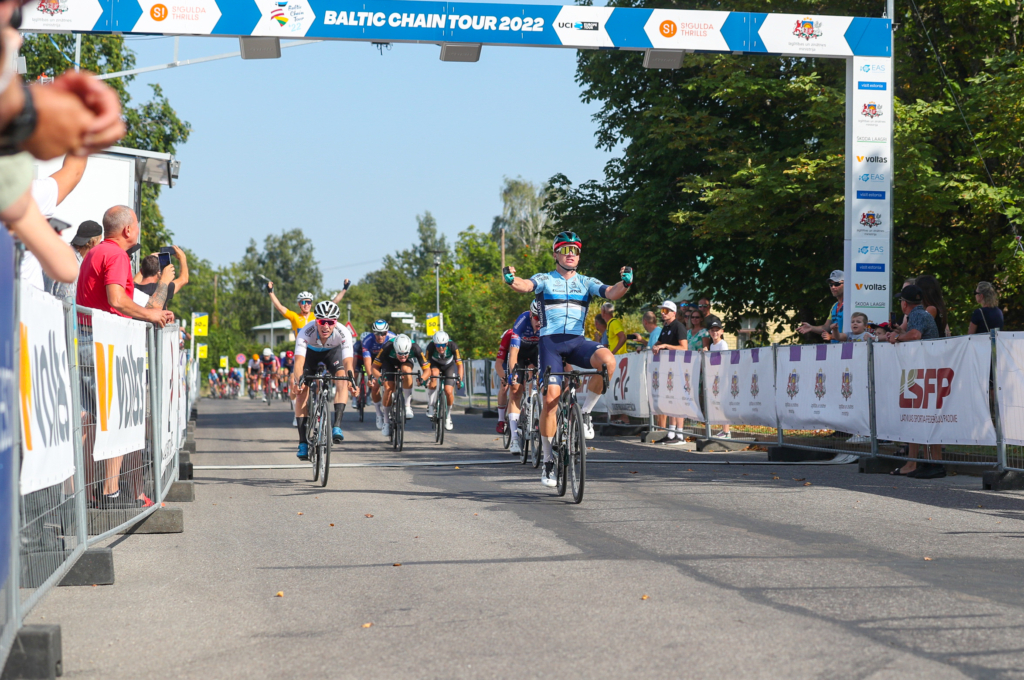 When reaching the 6 km long gravel section in the middle of the stage, the runners’ lead in front of the main peloton was 3.30. But then it started happening. In the main group, there was a bigger crash when reaching the gravel section, and the UCI judge decided to stop the race after the gravel section. Initially, there was a lot of misunderstanding, but the competition stood. Some were lucky because of this, some were not, because the big group had disintegrated significantly on the gravel section and the success they had gained was suddenly taken away. However, the leader Rait Ärm was lucky, he had flat tire on the gravel and got back to the peloton purely thanks to the neutralized race.

Finally, we continued the race, and the four runners were sent back to the distance of three and a half minutes by the decision of the judges. As the main group took it very calmly, the gap started to grow rapidly and quickly swelled to almost seven minutes. At that moment, less than 70 kilometers were left to drive. It started to look like the day of the runners would come, but the road turned to the side wind and several teams saw an opportunity to make tough race for their competitors.
They went full gas and the breakaway time gap was brought back 4 minutes with less than 20 kilometers. Everything was again under the control of the peloton.

The last riders were caught on the city streets of Sigulda about three kilometers before the finish line. The Estonian national team did the most work in front of the main group and the effort was rewarded – the preliminary work of Norman Vahtra, Gleb Karpenko, Siim Kiskonen, Mihkel Räime and Rait Ärm was shaped into victory by Martin Laas.
Dutchman Lars Rouffaer (Allinq Continental) was second in the stage and German Henri Uhlig (Alpecin-Deceuninck Development Team) was third. Ärm was eighth and kept the leading position, 7 seconds ahead of the German Mika Heming (ATT Investments). Laas moved up to seventh thanks to the bonus seconds earned by the win.

Detailed results can be found on the Baltic Chain cycle tour website balticchaintour.com or at timing.ee.

Tomorrow the bike tour will arrive in Estonia. On reindependence Day, a 186 km long stage will be run on the route Tartu – Antsla – Valga. The ceremonial start will be given from Tartu in front of the Estonian National Museum at 11 a.m. Half an hour later, all those who wish will have the opportunity to start the Retro Ride in front of the ERM and explore the exhibits of the Estonian Bicycle Museum at the starting point.

All stages of the tour can be seen live on our website, FB page, YouTube channel or Delfi.ee portal.