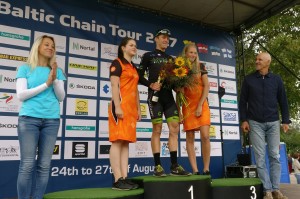 Today Baltic Chain Tour continued from Latvia with a 170 km stage from Jelgava to Sigulda. The finish was located on top of a 900 meter hillclimb with a nine per cent gradient. First to the line was Canadian Benjamin Perry from Israel Cycling Academy.
He broke away from the peloton 34 kilometers before the finish with five other riders. A bit later two more men joined them, but by the time it was 10 kilometers to the finish, the group had shrunk to four riders with a gap of 48 seconds to the peloton.
During the last kilometers the peloton picked up more speed and the break away group got smaller and smaller. In the last kilometers there was a steep downhill followed by a narrow bridge right before the final uphill. Meanwhile the peloton was already right behind what was let of the break away.
– In the hill I didn’t attack, but maintained a strong pace, but nobody followed, Perry says.
He claims the race was tactically tough for his team. The rain and 6 kilometer gravel road also caused some stress.
– Other teams were looking at us and attacking. I got a flat tyre on the gravel, but was able to ride through it with a little pressure left. Later I was able to get in the right brake away, and in the group we worked well together.
The race continues on Saturday in Estonia, and the situation in the General Classification is extremely tight, as Perry and Maris Bogdanovics, who won the first stage, have the exact same overall time. Bogdanovics continues in the yellow jersey thanks to winning the first intermediate sprint today. He also holds the jersey for the most competitive rider, but lost the most active rider’s jersey to Andris Voselkans. Silver Mäoma continues wearing the best young rider jersey.
Live coverage of the third stage from tartu to Tallinn (220 km) starts at 10:55 local time via our website and mediapartner Delfi.tv