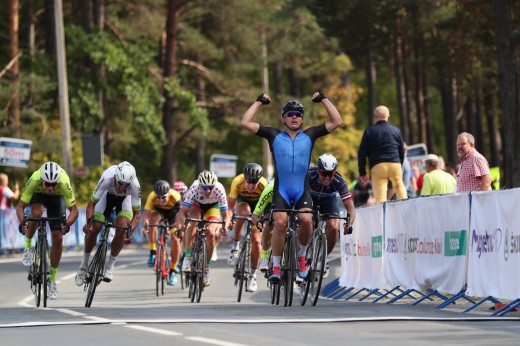 Baltic Chain Tour has so far provided two wins for hosting estonians. Today’s 152 km stage got excited 45 km before the finish, when peloton was splitted into pieces by strong sidewinds, leaving in front about 25 riders. Estonians had altogether five riders in front, three from national team (Jõeäär, Laas and Siim Kiskonen) and two from Cycling Tartu (Norman Vahtra and Oskar Nisu). In the end there was 5 laps ridden in Pirita and just before the end Stanislaw Aniolkowsky attacked, making the others work really hard. He was caught only 300 meters before finish. Siim Kiskonen followed the attack, while team-mates Jõeäär and Laas worked out their plans. Jõeäär lead out Laas and the 5th UCI win this season for Laas  was sealed. Second on the line was Emils Liepinš (national team Latvia) and third place went to Eryk Laton (Team Hurom).
“Jõeäär was planned to attack in last kilometre, but as Kiskonen was front, that was not a good idea. Instead of that Gert took a lead-out man role for me and pulled it off”, said Laas after the finish. With ten bonus seconds for the win Martin Laas moved in GC from 22nd place to top10.
Leaders jersey goes to Ramunas Navardauskas, who gained 7 bonus seconds from intermediate sprints and is 5 seconds ahead of Gert Jõeäär. Third in GC is Emils Liepinš (+0.07).
The winner of today’s stage got the tour’s green jersey and best young rider’s white jersey goes to Norman Vahtra (Cycling Tartu).
Tomorrow’s stage starts 11 o’clock inf front of Valmiera City Hall, expected finish time shall be 2:30 PM, with 157 km to ride.