Fifth stage of Baltic Chain Tour 2013 started in Lithuanian town Panevezys and headed to Utena. 154,1km stage saw most of the time strong sidewind and it did influence the race as expected. Peloton was into pieces before first intermediate sprint on 55,7km. 29 men attacked and got away from peloton. Gap was increasing every minute and it soon seemed that this was crucial moment in the race. Behind leader group small groups were forme and they did not have strength to chase leaders.

First intermediate was long downhill with technical corners before the line. First came over the stripe Maksym Vasilyev from ISD Continental team. Mountain finish was at the top of a hill and first to climb on top of it was Yuriy Metlushenko fro Torku Sekerspor. The man who won third stage last year in Baltic Chain Tour. By that time yellow leader jersey holder Paavo Paajanen from TWD – Länken was dropped to second group.   Second intermediate sprint was at the same place as previous – in Anyksciai and was won this time by Alexey Kurbatov from Team Russia. At that moment, 40 km to finish, the gap between leaders and followers was more than 6 minutes.

Baltic Chain Tour ends tomorrow in the capital of Lithuania – Vilnius. 152,4km race starts 14:15 from Utena and is expected to end in Vilnius approximately in 18:22-18:30. People of Vilnius sees riders for quite some time as 5 laps in capital of Lithuania will be ridden. 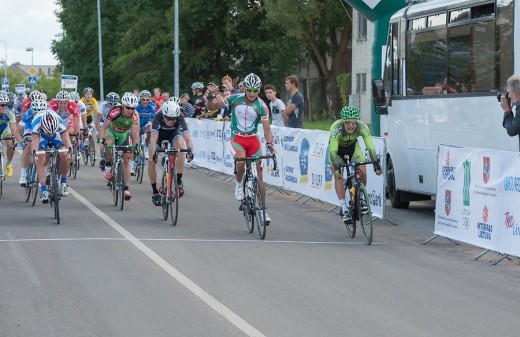